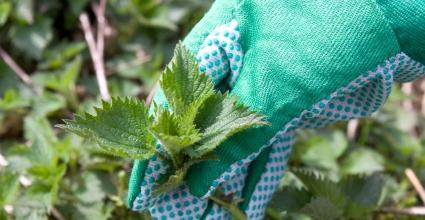 There are certain safety precautions we tend to take outside to ensure we stay healthy when we’re out gardening and enjoying our yards. Whether it’s wearing sunscreen, spraying on insect repellant or putting a fence around our pools, there are plenty of good things we do to keep ourselves safe.

But there are other dangers in your yard, says Carson Arthur, principal designer for Carson Arthur Design and host of HGTV’s Green Force.

“We have to be aware of the environment as we’re out there planting,” Arthur says. He says there are a few dangers we might encounter when gardening without evening knowing it.

Get your tetanus shot

Many Canadians, in an effort to go green, have started composting in their own backyards. And while that’s great, what many don’t know is that there have been rising levels of tetanus bacteria in our soil thanks to things such as composting.

Those rising levels mean if you start digging in the dirt with a cut on your hand, you may have just exposed yourself to the bacteria. “We don’t think of these things as gardeners,” Arthur adds. “We think, oh, it’s soil, it’s natural… but with just a little scratch or an open sore on your hands, you can be exposed.”

Arthur recommends gardeners get their tetanus shots this year. You need one every 10 years, and since this is 2010, it will be easy to remember when you need your next one, he adds. And don’t forget to protect yourself in other ways. Always wear gloves, use rusty tools with caution, and if you do get a cut, clean it immediately and cover it before heading back out into the garden.

Make friends with the birds

The threat of the West Nile virus has many people dumping standing water and trying to eliminate mosquitoes by spraying pesticides in their grass. But spraying harmful chemicals into the air isn’t the healthiest or most environmentally friendly way to get rid of mosquitoes, Arthur says.

Instead he recommends making friends with your neighbourhood birds, particularly wrens. “A wren eats about 10,000 mosquitoes a day,” he says. “Wrens are one of the most voracious bug hunters out there – and it’s a cute little bird.”

He recommends you put up a birdhouse in your backyard to attract wrens and other insect-eating birds. Not only is it environmentally-friendly, but you’ll get the added benefit of getting to enjoy all the birds in your yard.

Yes, bunnies are cute. But they often dig in our gardens and eat our flowers, plants, veggies and fruit. So do the skunks, squirrels and all those other little critters. If you want to keep them out, perhaps you have been resorting to chemicals or even “natural” remedies like cayenne pepper, which is actually quite harmful to animals.

There are easier and healthier ways to keep Thumper and his friends out, Arthur says. There’s a product called the Scarecrow, which is a motion sensor sprinkler you hook up to your hose. Set it up at night and if something rustles in your garden, the sprinkler will turn on and shoot the offending critter, scaring it into running away. (Don’t forget to turn it off before doing your gardening, though, or you could be in for an unpleasant surprise!)

It’s really just about understanding why the animal is rooting in your garden, Arthur adds. For example, when a squirrel sees that you’ve disturbed your soil by planting bulbs, it thinks another squirrel has been there and hidden food.

Simply replace the soil after you’re done planting so it looks like it hasn’t been disturbed, Carson recommends. “It’s a simple little thing, but it’ll save you a lot of headache.”