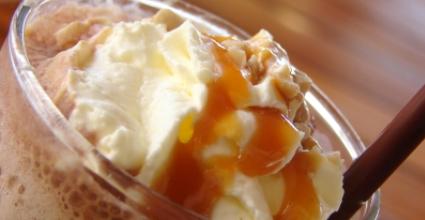 When you sit down at your desk on a dreary Monday morning, the only thing you’re looking forward to is your coffee. It’s rich, sweet and creamy, and it makes the long day ahead seem less daunting. The good news is that the coffee itself won’t pack much of a calorie-laden punch. The tasty additions, however, can. And if one cup isn’t enough, you could end up drinking the equivalent of a small meal.

“Some people have three cups of coffee with cream and sugar,” says registered dietician and certified personal trainer Alexis Williams. “Cutting that out can cut over 300 calories, which can amount to about a pound a week.”

Liquid calories are the sneaky culprit that may be thickening your waistline as you stare down at the climbing scale in puzzlement. While there are some beverages that people know to avoid like sugary soft drinks and whipped cream-topped coffees, others, like seemingly benign fruit juices, can sometimes surprise drinkers with the amount of calories and sugar in one glass. Another potentially problematic fluid is alcohol, mostly because it’s often paired with high-calorie snacks.

“Alcohol is the worst one,” says Williams. “Mostly because people eat more when they have a few drinks. When you’re enjoying yourself, you can overdo it. The problem with liquid calories is that they don’t make you feel full,” she said. “They’re just empty calories.”

Planning ahead makes a difference

Fortunately, those who want to shed some pounds don’t have to cut out liquid treats entirely. The key is knowing how caloric the drinks are, treating some icy concoctions as desserts rather than morning pick-me-ups, and finding tasty alternatives.

Williams recommends pairing fizzy water with a small amount of fruit juice. Or, if you’re in the mood for something warm and sweet (like a latte), try limiting the amount of sugar or syrup. In fact, most coffee shops will put in half the amount of syrup if asked. Also, start to re-train your palette to appreciate non-fat or soy milk.

If you’re craving juice, be mindful of the sugar content and don’t overdo it. If you’re in the mood for a frozen treat, a smoothie made from actual fruit is a healthier option because natural sugars are metabolized by the Healthy Body more efficiently than the refined sugars found in some concentrated powders. For those who find an iced tea most refreshing, Williams recommends pairing cold black or green tea with a small amount of juice and limiting consumption to one cup a day.