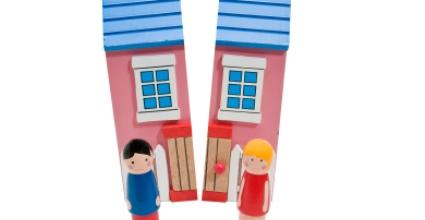 My husband is a packrat.

I’m the kind of person who abhors clutter. I don’t like things on my kitchen counter, I’m not a fan of knickknacks and even bookshelves irritate me because the different colours on the books’ spines look messy. But, somehow, I got saddled with a spouse who has to keep every single item he (and his grandfather) ever owned.

I’ve tried cajoling him to get rid of stuff. I’ve tried shaming him. I’ve tried bargaining with him. Nothing works. Our garage is filled with so many boxes of his stuff we can’t park a car in there. (Although, thanks to me, it’s at least neatly organized and labeled!)

One of my favourite stories to recount is the one where we were cleaning out the garage. I had two paper boxes filled with my childhood items. One contained photo albums and mementos, the other some of my cherished books.

Since I had been complaining about the amount of junk in the garage, my husband was looking for things to add to the “give away” pile. Upon opening the box of books, he said, “This is just a bunch of books. You could get rid of these.”

I gave him a look. I started to count the number of paper boxes with his mementos, but stopped at 17. SEVENTEEN! There were his old Cub Scout badges, his notebooks from high school, his grandfather’s coin collection and about a million pictures from his trip to Europe. There were old toys, old crafts, and I think there was even some crumpled up tissue a famous person MAY have sneezed in.

And although I can laugh about it now, I admit I was seeing red. I frostily replied that when he was able to whittle his boxes of mementos down to one, I would get rid of my box of books.

That shut him up, but while I’d love to say it reformed him from his packrat ways, it didn’t. He still loves to cling to every single piece of clutter in the house because “we might need it some day.” It drives me nuts, because nine times out of 10, we won’t want, need or use that item ever again.

Recently I had the opportunity to speak to Hellen Buttigieg, organizing guru and host of HGTV’s Neat, about conquering clutter, and she gave me a great piece of advice. She said to clear out a junk drawer (in the kitchen or workroom, perhaps) and put every single item in a box. When we need a particular item, go get it from the box, use it and put it back in the drawer. At the end of a month, give away whatever is left in the box – because if we haven’t used it, we probably won’t. (For more of Hellen’s organizing tips, be sure to read “Conquering kitchen clutter” this week on Primacy Life.)

I took Hellen’s advice and did just that – only to find myself continually thwarted by my packrat husband. I swear he made sure to use EVERY utensil in that box just so I wouldn’t get rid of anything!

Yes, it can be a challenge Healthy Living with a packrat. But I’ve found ways to stay organized despite his packrat ways. And deep down, I do have a sneaking sympathy for him too. After all, I really, really don’t want to get rid of that box of old books!